The original Dark Souls game has just got a complete overhaul to its multiplayer thanks to one industrious modder. Inferno Plus’ Dark Souls: Remastest mod introduces classic Halo maps, power-ups, and reworks to weapons, spells, and abilities. Oh, and it removes most of the co-op restrictions from the old PC game. That’s only scratching the surface, too.

The mod jazzes Battle of Stoicism up with three Halo maps and two game types that can be played by up to 18 players. You can play Team Deathmatch and try to beat the other team to 30 kills, or Capture the Lizard, which involves swiping your enemies reptile and balancing it on your head while you return to your base – it’s as amusing as you’d hope it would be.

After creating a single-player version of Blood Gulch with bosses and the lot, Inferno Plus explains he set about improving Dark Souls’ multiplayer mode Battle of Stoicism. For Inferno Plus, part of the issue was that players were spawned in closer to each other and given little reason to go out and experience the maps.

Recreating a selection of Classic Halo maps helps in part, but Inferno Plus reckons creating power-ups motivates players to explore the maps he’s stitched together. One of them offers a damage boost, whereas another makes you invisible. My personal favourite power-up gives you special arrows and bolts that set everything aflame.

Inferno Plus has also gone about reworking heaps on the game’s weapons and spells to make them all viable. Even the campaign has got some TLC, with lots of the co-op restrictions now lifted.

I’d recommend checking out Inferno Plus’ video for a full breakdown of what the mod involves, and the creative process behind it. It’s a meaty watch, but it’s fascinating. The video also features a recreation of a Red versus Blue scene – because what else are you going to do on Blood Gulch? 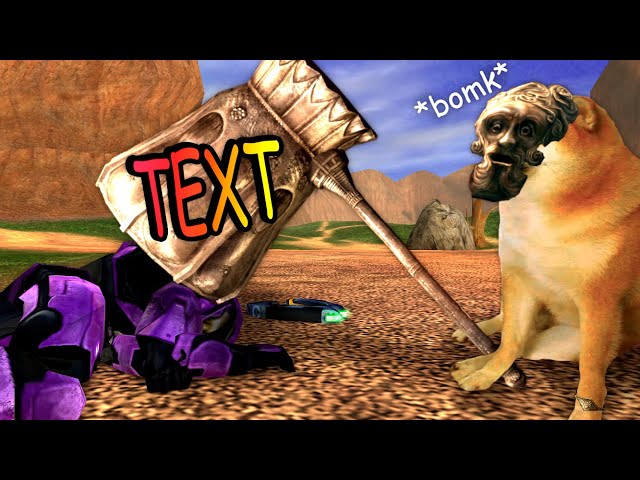 If you’d like to download the mod, you can find it on Inferno Plus’ Patreon where you can support him, too. Instructions on how to download the mod are in the README.txt, and you can play it with your buddies if everyone has the mod installed.

If you’re looking for some other RPGs to try, in the meantime, you can follow that link.