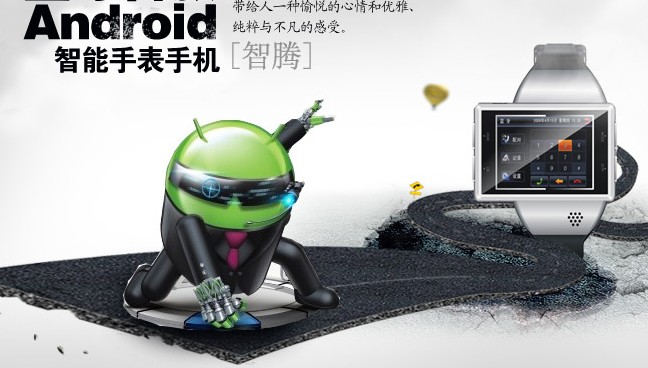 We have reported a lot of smartwatches launched in China; some are made by smartphone makers, such as Coolpad and Shanda GEAK; some like inWatch and T-Watch are by established tech companies or entrepreneurs. Some are Pebble-style that display content or alerts from iOS or Android phones on an e-paper display, while some are embedded with custom Android operating systems.

When smartphones were on the rise a couple of years ago, manufacturers of Shanzhai feature phones down in Shenzhen area in South China picked it up quickly, shipping a variety of smartphones to Chinese users’ needs. Most of them adopted the system-on-chip solutions by Taiwan-based MediaTek Inc., or MTK.

Not only for smartphones, MTK has been also providing solutions for tablets, smart TVs, set-top boxes, GPS units, Wi-Fi routers, Bluetooth devices, etc. It’s not difficult at all for it to pull together solutions for watch-shaped smart devices.

You’ll get hundreds of results after typing in the search query “Smartwatch” on Taobao, priced from several hundred yuan to little less than 2000 yuan (little more than $300).

Most are like this one (also see the image below) that is just a watch-shaped smartphone that works with SIM cards by Chinese telecom operators. Most of them are powered by Android, with touch screen, and can make and receive phone calls or other messages. Customized versions of some widely-used smartphone apps, such as QQ IM, Weibo and WeChat, have been pre-installed.

Leyuan, an original design manufacturer that is based in Guangzhou — a city near to Shenzhen, reportedly has designed a dozen of prototypes of wearable smart devices, ranging from GPS units, Bluetooth devices to mobile operating system-powered smart gadgets. The categories the company would like to cover include healthcare, eldercare and sports.

Solution providers like MTK didn’t offer apps for smartphone manufacturers. But for wearable device solution providers like Leyuan, they have to develop apps for some of the wearable gadgets that can work only when being connected to apps in users’ smartphones or other devices. Leyuan also promises to develop cloud-based services for clients as data and data analysis are the most important for some wearable devices.